December? Can anyone believe it's December?? It's been such a momentous year for me, such a "big year" for me & S. Let's take a look in the kitchen together... 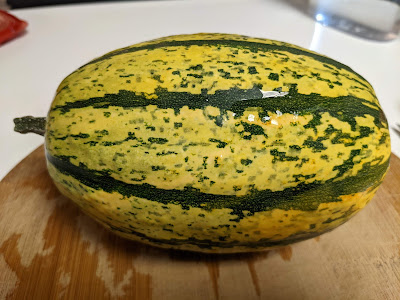 I love the fall season for all its strange and wonderful pumpkins and gourds. This is a spaghetti squash that we bought on our big road trip in October (at Cricklewood farm). I kept him in the fridge for a couple of weeks till S came to Toronto for the semester break. I only came to know of them last year in France and I'm fascinated by their texture. 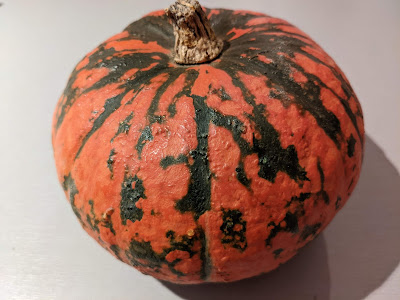 And here is his brother in France, an organic potimarron we bought from the organic market on Raspail on Sundays, such a wonderful market. The prices are eyewatering but the produce is absolutely stunning. 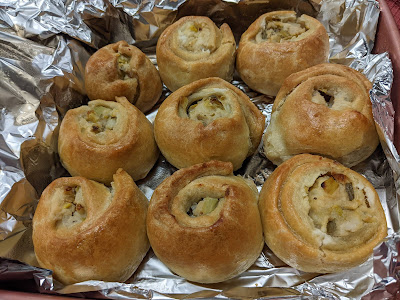 I'm finally getting back into baking projects after a few months of "just baking bread". Here was the first project, traditional Jewish knishes stuffed with potato and caramelised leek. My colleague asked for these because her grandma had made them for her when she was young. 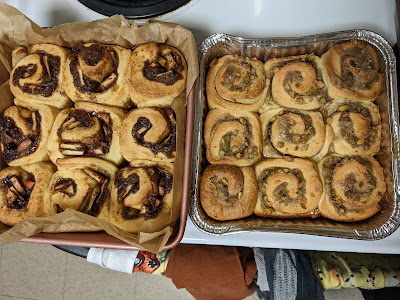 This was a bunch of scrolls I made for the end of term party at work. The one on the left is apple cinnamon, and the one on the right is pistachio cardamom. Delicious flavour combos! 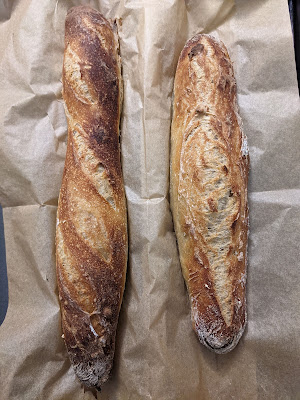 Winter = baguettes. Living in Canada = no baguettes. Solution? Bake your own sourdough baguettes! 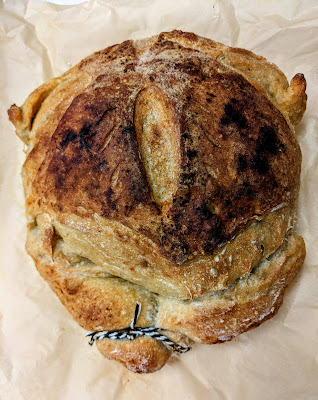 This was the sourdough turkey I made for Thanksgiving, I think the bread over-rose and the body became too globular but it was cute anyway, my favourite part was tying up the legs! 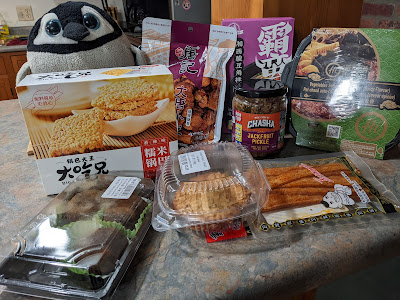 Long time readers of IMK may remember Pengy who is a soft toy that my Toronto friend gave me in 2017. Pengy has been away on trips with us to many countries. We finally managed to get away together again recently, to small town Ontario for the weekend. Of course we stopped off at a giant Asian supermarket for snacks - there's glutinous rice crackers, mochi, almond cookies, spicy gluten strips, hot & spicy "hotpot" and noodles, jackfruit pickle and "weird" flavoured broad beans. 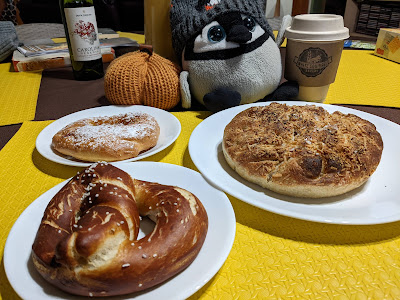 We stayed for the weekend in Exeter where there is an adorable rural village bakery called The White Squirrel. I couldn't resist the little knitted pumpkin. For breakfast we had a peach galette, traditional German style soft pretzel and a parmesan black pepper focaccia. Everything was delicious! 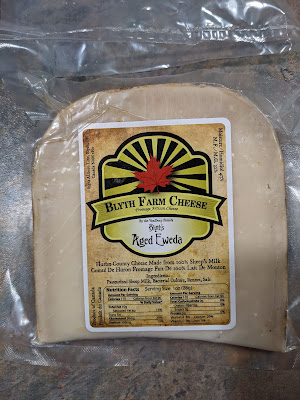 We also enjoyed some local cheese, a sheep's milk Gouda that was sharp and tangy..

And right now I'm visiting S in Paris. I am absolutely dumbstruck by how delicious everything is, including the 1 euro baguette from Eric Kayser - a chain, but a delicious chain nevertheless - just downstairs, 90 seconds walk from the front door. I'm also super impressed that the coffee at our local - Le Standard, a very chichi traditional French bistro - is absolutely on point. Dark, aromatic and perfect for delivering a dose of sunshine in gloomy wintery Paris. And only costs 1.6 euros to boot. In comparison, coffee in a "proper cafe" is generally over $5 Canadian! 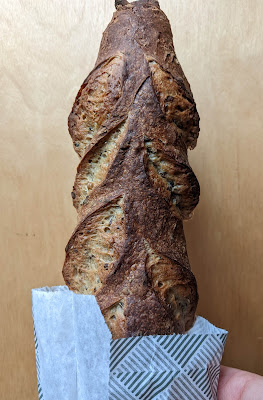 A grainy baguette, from another favourite local boulangerie, Le Fournil de Guillaume. I had to look it up on Google since I only know it by location! 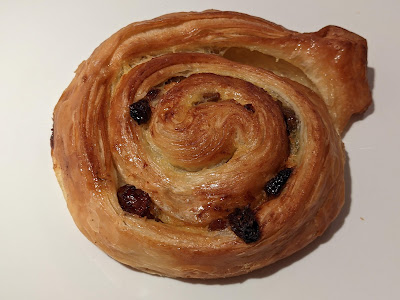 Ah, when I'm in Paris my diet consists of only two food groups... bread and pastries!
The curveball..

It was my second time doing Nanowrimo (National Novel Writing Month), a US based thing but with a community all around the world. I didn't write a novel this time but used the month as a motivation to write 50,000 words in November. I wrote about patient stories mainly and did some exploring of themes surrounding death. It was a really interesting and enriching experience and I only had a few days where I felt blocked. I hope I can keep writing as the year goes on!
I'm sending this to Sherry of Sherry's Pickings who hosts the monthly In My Kitchen series - thanks for hosting Sherry and Merry Christmas everyone!
Posted by dreams of sourdough at 19:47

Email ThisBlogThis!Share to TwitterShare to FacebookShare to Pinterest
Labels: IMK